You are here: Home / News / Taiwan to purchase soybeans from Iowa and Minnesota 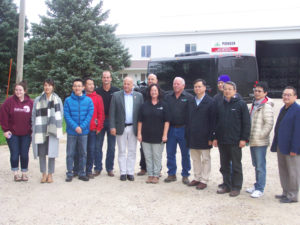 A trade delegation from Taiwan on a tour of farms with Congressman Steve King.

A ceremony will be held at the Iowa Capitol early this afternoon to formalize Taiwan’s purchase of nearly four million metric tons of soybeans from Iowa and Minnesota.

The trade delegation from Taiwan signed documents in Washington, D.C. Thursday and made stops in Iowa this weekend. On Sunday, they visited a farm in northwest Iowa, east of Hinton. Republican Congressman Steve King arranged for tours of farms near Nevada and Fort Dodge, too.

“I wanted them to see, just take the ride across the landscape because I’ve learned this from our foreign visitors in the past that I’ve brought here in the past that they come from places where it’s just hard to conceive of the idea of horizon-to-horizon row crop production, really, without a break,” King said. “….Let ’em know you can buy all the grain you can buy and we’re not going to run out here in Iowa.”

King said he and his staff have traveled to Taiwan several times to tout trade and he predicted even more U.S. soybeans will be shipped to Taiwan in the future.

“That pipe of exports to China — and I’ll just use it as a pipe size — that’s been shrunken considerably because of the trade protectionism that China has slapped on especially our beans and our pork, but also other products,” King said. “…To replace one big pipe to China we have to replace it with a lot of smaller pipes to places like Taiwan and other countries.”

According to King, the U.S. is now providing nearly 80 percent of Taiwan’s soybean supply. The move is likely part of Taiwan’s effort to strengthen ties to the U.S. as China increases pressure on Taiwan, which it claims as part of Chinese territory.