You are here: Home / Business / Business Council survey finds most member optimism ever 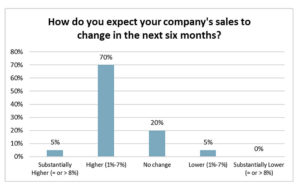 The IBC finds the most optimism in 10 years of surveying members.

“Our member show that this is the strongest that the economy has been in the ten years that we’ve been doing the survey,” Van Gundy says.   The survey was taken before the news of the new Canada and Mexico trade agreement — which she says won’t do anything but help that optimism.

“Yeah, definitely I do believe it will be a positive for our members and for the economy in Iowa,” she says. The survey uses an index for sales, capital spending and employment to gauge the business sentiment of many of the largest businesses in the state. While the optimism is abundant — Van Gundy says the biggest concern remains finding enough qualified employees. She says the IBC is doing what it can to try and help the situation and are targeting young people to let them know there are a variety of careers available.

“We’ve pledged 30,000 internships, externships and apprenticeships so that we get students on site at our locations to help them understand what those jobs look like,” Van Gundy explains. “And then we get teachers spending their time with these businesses helping them understand the coursework and how it applies. So, starting out at an early age developing that pipeline.” Iowa is now alone in second place in the country for unemployment rate after dropping to two-point-five percent in August.

“Which sounds great — but if you want your economy to keep moving and to have growth within businesses — we do have to have the workforce here in order to do it,” according Van Gundy. “Our members a couple of weeks ago met, and some of the challenges they talked about is how do we attract more people to our state and how to retain more people. So, we are looking at putting some campaigns together around just the different jobs and careers that are here, and the quality of life.” She says Iowa has a lot to sell to draw new workers to the state.

She says they have a new employee that just recently came back to Iowa to work the IBC because they were faced with a long commute and a higher cost of living where they worked. Van Gundy says they also plan to let perspective employees about a lot of unique things Iowa has to offer.

She says the first in the nation Iowa Caucuses are something that will heat up after the November elections. “That’s another thing that Iowa’s know for that’s exciting that can attract people back to our state as well,” Van Gundy says.

To see the full IBC quarterly survey, go to: IowaBusinessCouncil.org.