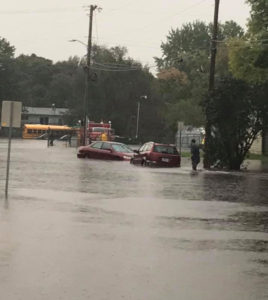 Areas of northeast Iowa are facing flash flood damage for the second time in less than a month.

“This flash flooding has overtopped a lot of roads. We do not know the extent of damage to some of these roads, so we can remind (motorists) enough, do not drive through flood water,” Ryan said. “We’ve got a lot of roads that have water over them – stretching from Winthrop all the way to Colesburg.”