You are here: Home / Agriculture / Axne, Finkenauer and Scholten weigh in on Farm Bill impasse 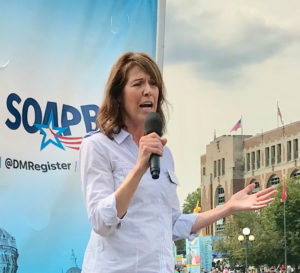 The three Democrats challenging Iowa’s three Republican congressmen are calling on Rod Blum, David Young and Steve King to pressure their GOP leadership for action on the Farm Bill.

“I hope they get back to work and go back out to Washington and demand that we settle this Farm Bill because it really impacts the lives of Iowans, our farmers, our rural communities and, as everyone well knows, our overall economy,” said Cindy Axne, the Democrat running against Congressman David Young.

The 2014 Farm Bill expired Sunday and there’s no replacement yet. Republican leaders do not intend to reconvene the U.S. House until after the November election. Axne said Iowa farmers are paying the price for Washington dysfunction.

“We’re already seeing banks not loaning as much. We’re seeing implement dealers not getting as many new orders for next year because of the uncertainty with the trade wars,” Axne said, “so the increased uncertainty by not having a Farm Bill go through in a timely fashion just adds to that.”

The impasse revolves around new work requirements for food stamp recipients. President Trump and House Republicans support the move, but Republican Senator Chuck Grassley said yesterday that there aren’t enough votes in the senate to stop a filibuster on the Farm Bill if that’s included.

“I think it’s going to be impossible for us to go along with the House and get 60 votes in the United States Senate,” Grassley said during a conference call with Iowa reporters. “Now, it happens that I favor what the House is doing, but we’ve got to have a Farm Bill and if this is holding it up, I’ve got to say that even what I think is a good idea has to go by the wayside.”

As for the timing of the Farm Bill’s passage, Grassley said for the time being, farmers should be o.k.

“Immediately, I don’t see a problem,” Grassley said, “but if you get into November, December, I think there’s problems.”

A campaign spokesman for third district Congressman David Young says Young “is disappointed a new bipartisan Farm Bill has not been enacted” and he says Young is monitoring the ongoing negotiations to ensure his priorities are including, like a bipartisan measure to address gaps in the mental health system for farmers and agricultural workers.

First District Congressman Rod Blum issued a statement when the Farm Bill cleared the House in June, stressing the importance of providing “certainty” to farmers by passing the Farm Bill. Blum also praised the reform of the food stamp program to require “able-bodied, mentally stable” individuals to work or be training for a job.

Fourth district Congressman Steve King told a crowd in Carroll this week that he would have liked to have had the Farm Bill done last month, but King predicted it will pass congress some time in early December.