You are here: Home / News / Traffic diverted due to 20-foot sinkhole on Highway 69 near Jewell 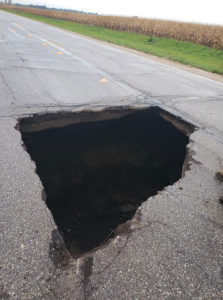 Traffic on U.S. Highway 69 north of Jewell in southern Hamilton County has been rerouted due to a sinkhole that developed overnight. Hamilton County Sheriff Doug Timmons said six vehicles were damaged before traffic was diverted.

“There’s a sinkhole that’s probably about 20 feet across and probably 8-10 feet deep that cars were hitting,” Timmons said at the site this morning. “Luckily, nobody was injured.”

The sinkhole is in the northbound lane, but a detour is being set up so traffic completely avoids that area. The route takes drivers on county roads and Interstate 35 to bypass that section of U.S. Highway 69.

“Approximately two, maybe three days in order to get this fixed,” Timmons said, adding the cause was “probably a tile that’s washed out with all the rain that we’ve had.”