“Throughout history, sexual harassment has been a stain on our culture,” Reynolds said, reading the proclamation aloud during a ceremony in her statehouse office. “It is a destructive force in the workplace and in all facets of life.”

The governor said sexual harassment “is not a partisan issue” and the proclamation indirectly referred to the #MeToo movement as an “unprecedented moment in time” that has given women the courage to speak out.

Reynolds told reporters after the event there have been “a whole lot of victims throughout” the confirmation process for U.S. Supreme Court nominee Brett Kavanaugh and it’s time for senators to vote. 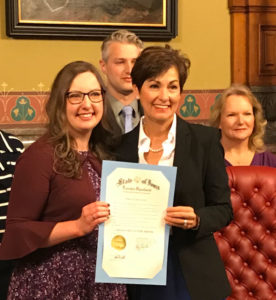 Cate Bryan of Waukee and Governor Reynolds with proclamation.

“Get it done,” Reynolds said during an interview with Radio Iowa and The Cedar Rapids Gazette. “I think we need to end this process and move on.”

Reynolds said it was important that both Kavanaugh and his accuser, Christine Blasey Ford, testified before the Senate Judiciary Committee a week ago.

“I think it was appropriate that they went ahead and did the FBI investigation. I think that was the right thing to do,” Reynolds told reporters. “…Now they just need to make their decision.”

Reynolds emphasized that Ford had asked that her allegations remain confidential. Reynolds indicated confidentiality is a key part of the process for state employees who file complaints about the conduct of state agency directors. A section of the state employee handbook is being redrafted after a recent independent review found that was not clear.

“That’s really imperative and paramount in giving individuals the confidence that if they do report, and they want it to remain confidential, that it will be,” Reynolds said.

Early this morning, Governor Reynolds was surrounded by a group of women and men as she signed the “Change the Culture” proclamation. Cate Bryan, a piano teacher in Waukee, said she started having a conversation with the governor several months ago about issuing an official proclamation on the issue.

“I have worked in an office environment and have had some negative experiences there, so this has kind of been laid on my heart,” she told reporters after the event. “Especially as I’m teaching…as my five-year-old little girls are playing piano, I look at them and say: ‘I don’t want them to experience what I had to experience at 25 or 29 or whatever.'”

“I’ve not personally experienced sexual harassment at a significant level,” she said, “but I’ve seen it.”

Augsperger told reporters it’s time for both men and women to have a “calm, rational” discussion about changing our culture, so everyone is treated with respect.