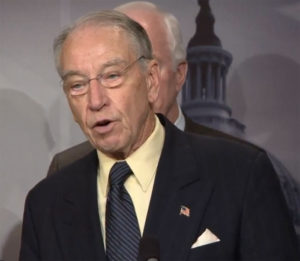 “This started downhill very quickly, on about July the 10th,” Grassley said this afternoon. “…You can look back 87 days and you can see that everything but whether he’s qualified to serve has been brought up.”

Grassley, who is chairman of the Senate Judiciary Committee, said he had promised a “fair and thorough process” for reviewing Kavanaugh’s nomination and Grassley said there is “no hint of misconduct” in the updated FBI background investigation he and other senators just reviewed.

“But what I’ve been dealing with since July the 10th…the downhill slope, is really dealing with a ‘Demolition Derby,'” Grassley said. “They just about destroyed a good person to be on the Supreme Court.”

“I would like to have the future mending things, so we can do things in a collegial way that the United States Senate ought to do and, particularly, when it comes to Supreme Court nominations,” Grassley said.

Grassley and other key Republicans on the Senate Judiciary Committee spoke this afternoon during a news conference in Washington, D.C. and Grassley ended with a message to reporters.

“Now I would never use the words ‘fake news.’ I consider you folks policemen for our democratic system of government, but I want to show you where some of you had bias. I’ve had demonstrators in my office for two weeks now, both for Kavanaugh and against Kavanaugh. One time the people that were for Kavanaugh wanted to be interviewed and they said, ‘We’re only interested in interviewing people against Kavanaugh,'” Grassley said, his voice rising. “Now that’s a bias that none of you should be proud of.”

The Senate is scheduled to vote on Kavanaugh’s nomination Saturday.

“Hopefully we’re 48 hours away from having a new person on the Supreme Court,” Grassley said.

Iowans who oppose Kavanaugh’s nomination have been delivering postcards to Grassley’s office in Des Moines this afternoon, urging Grassley to vote no on Kavanaugh. Grassley has said he will vote yes.