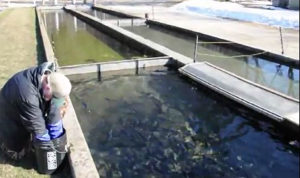 The fish raceways at the Manchester Hatchery.

Clean up is underway in northeast Iowa after heavy rains and flash flooding did some damage at the DNR’s Manchester Fish Hatchery, Fisheries Biologist Dan Kirby says the soil was already saturated and a heavy rain Monday led to the flooding.

“The small stream that runs by the fish hatchery came up and out of its banks and flowed into the lower end of our facility at the fish hatchery here — so into our raceway as we call them, where we keep the trout,” Kirby says. “And that’s pretty uncommon. We’ve only had the happen one other time in the last 10 yeas. And before that, it had been many decades, as far was we can tell.”

Kirby says they aren’t sure yet how much damage there is. “There’s not doubt that we lost fish,” he says, “at this point we’re just trying to get the hatchery put back together and clean up the grounds. A lot of the staff are out trying recover trout that got stranded in ponds here or there. And then they are putting them into areas that are cleaned out and open — and then we’ll have to start sorting through all of those.” The fish are generally sorted by size — which ranges from fingerlings that are inches long– to the brood stock which are 20 or more inches and weigh eight to ten pounds.

He says the fish they recover shouldn’t show too much impact from their rush away to freedom. “Obviously a fish is better equipped for flood flows than a human, but it is stressful. The trout are cold water fish so it depends a little bit on water temperature. There can be some thermal stress — so if you have warm water impacting that cold water fish — you can have some mortality from that,” according to Kirby. “It’s not likely that we had a lot of that. The fish are probably okay.”

Kirby says they got lucky as the rushing water didn’t do a lot of damage to the infrastructure of the facility. He says they had some fences knocked over and sorting screens damaged. “Overall this time on this flood it did not get into our actual office that is sitting here as well, which it did ten years ago, so we were spared the really bad damage as far as facilities,” Kirby says. “The trout actually have value themselves, and until we find out how many of those were lost it’s not really easy to know a dollar amount at this time.” He says they will do an inventory on all the fish once everything has been collected an put back in holding areas.

Kirby says the trout stocking operations will be slowed for a bit as they have everyone working on cleaning up and finding fish. He says it’s just another issue they’ve had with the stocking program this year. “Just the weather that we’ve been having has been impacting us on stocking anyway. It’s hard to get out there in some of our rural areas, it’s just wet and saturated. Usually we stock trout into our streams from about April 1st into the last day of October,” Kirby says. He says most of the streams will have plenty of trout in them that have already been stocked, or that are still there from last year.