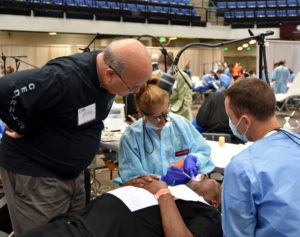 Dentists at a previous IMOM event.

The 11th annual Iowa Mission of Mercy (IMOM) free dental clinic is on the western side of the state this year in Sioux City. Dentist Richard Hettinger says all the patients will be treated in the Tyson Events Center.

“We’ve got a hundred dental chairs set up on the surface that normally has ice on it for hockey this time of year,” Hettinger says. Doctor Hettinger practices in Sioux City and says they will treat patients on a first-come, first-serve basis.”We can do fillings and extractions and cleanings and root canals. We’ll be able to do some partial dentures for people who have missing front teeth,” Hettinger explains.

He says the dentures are something he particularly enjoys making because of the impact they can have. “Those are the kinds of things that allow people to go apply for a better job or maybe get a promotion in the job that they’ve got, according to Hettinger. “When they can have the confidence that they can smile and talk to somebody and not look like a picket fence.”

He says it is important to treat dental issues people have to avoid longer term problems. “Infections that can reside in the mouth can be kind of long-term and chronic. And then flare up into something that can be life-threatening if it happens to invade into the brain or something like that,” Doctor Hettinger says. “And it’s not something that happens every week — but it does happen someplace every month in this country.”

Hettinger says they are able to get a lot done in their makeshift dental office. “We will probably take care of about a thousand people in the next two days. We’ll do about $900,000 worth of dental care,” Hettinger says.

All of the care is donated. He says they’ll have around 900 volunteers who are dentists, dental assistants, hygienists and other doctors to clear the patients to have the dental care. And they will provide meals to those who need them.  Hettinger says people already had started lining up Thursday to get in when the doors opened at 6:30 this morning today. The free dental clinic continues Saturday from 6:30 A.M. until 5 p.m. in Sioux City.

This is the second time the free clinic has stopped in Sioux City.