You are here: Home / Human Interest / Iowa soldier lost in World War Two to be buried in Thompson 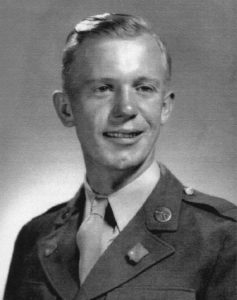 An Iowan buried overseas as an unknown soldier for over 70 years is coming home.

Army Private Donald Brown of Thompson was killed in World War II on July 28, 1944. Iowa National Guard Lieutenant Colonel Michael Wunn says research found Brown, who was 24 at the time of his death, was buried at an American Military Cemetery in France.

“With modern science, through DNA analysis, positive identification of the previously unknown remains of Private Brown were identified and are being brought home to his family here in Iowa for burial,” Wunn said. The ceremony will take place tomorrow (Saturday) at 3 p.m. at the Thompson Cemetery in Brown’s hometown, located in north-central Iowa’s Winnebago County.

Some of his relatives plan to be there. “Of course, his parents are gone, and his siblings are gone, but there will be a number of nieces and nephews who will be coming back for his service. Many of them have military service of their own they’ve provided to our country over the years,” Wunn said. Brown left for overseas duty in March of 1944. He was killed just four months later when his M-4 Sherman tank was destroyed near Cambernon, France.

“My understanding of it is that he was in a tank that was hit by enemy fire and he was one of the only ones in that tank who was killed,” Wunn said. “Some of the other crew members were able to get out. Unfortunately, because the tank was burning and the rapid pace of the advance, they were not able to recover his remains at the time of his death.”

This is the third case this year that the Iowa National Guard has supported in which a previously unknown soldier was identified and brought back to the state for burial. “I think it’s important to remember there’s ongoing work that continues in Europe and the Pacific to try to identify the unknown remains that we have of those missing from those conflicts – particularly World War II, Korea, and Vietnam,” Wunn said. “That work doesn’t stop, it continues, and it’s really important we bring everybody home that we’re able.”