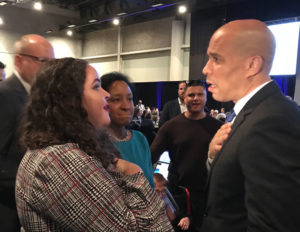 New Jersey Senator Cory Booker encouraged fellow Democrats in Iowa this weekend to “stay faithful” despite hurt and angry feelings in the aftermath of the U.S. Supreme Court fight.

Booker was the keynote speaker at the Iowa Democratic Party’s “Fall Gala” fundraiser Saturday night. He flew to Des Moines immediately after casting his “no” vote on Brett Kavanaugh’s nomination to the U.S. Supreme Court.

“Even in the face of a defeat, we can never be defeated. Even when we are knocked down, we have to understand that we are never knocked out,” Booker said. “Even though we have so much pain, it can never stop our perseverance.”

Booker, though, had a note of caution for his fellow Democrats.

“We Democrats can never be pulled down so low that we hate folk. We can’t hate Republicans. We need each other as Americans. We’ve got to lead with love,” Booker said. “You can’t lead the people if you don’t love the people — all the people.”

Booker has addressed smaller groups of Iowans and campaigned here for Hillary Clinton in 2016, but his 45-minute-long speech this Saturday gave the potential 2020 presidential candidate a chance to articulate his idea of what it means to be a Democrat.

Booker’s grandmother was born in Des Moines and when Booker arrived in the banquet hall he quickly found a group of family members sitting together. From the stage about an hour later, Booker acknowledged about 50 cousins in the audience as well as his mother and a 99-year-old aunt, then Booker launching into his family connection to the Iowa coal mining community of Buxton.

“We are all descendants of Buxton. Remember where we came from. This is an Iowa story. This is an American story and Buxton was ahead of its time,” Booker said, “There’s a book about Buxton. They call it a utopia. Why? ‘Cause black folks and European immigrants were all living together. They were living integrated.”

On Sunday, Booker and his family had a reunion in Des Moines. On Monday, Booker is scheduled to campaign with Iowa Democrats in Adel, Boone, North Liberty and Davenport.