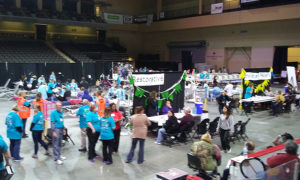 Dentists and other volunteers provided free dental care to more than 900 people in the two-day annual Mission of Mercy clinic Friday and Saturday in Sioux City.

She says they bring students every year, not matter where the Mission of Mercy is held. Miller says her students do everything from fillings to oral surgery. It’s the 10th year Miller has taken part and says it was more special with the event returning to Sioux City.

“Since we’re in Sioux City, I get to see a lot of my past grads,” Miller explains. “So, it really makes me smile to know that they were impressed with it and come back to volunteer again and again.”

Cori Van Sickler drove from Ft. Dodge to help in the effort.

She says she came with her daughter, a pharmacist in Des Moines. She helped out in the pharmacy with paperwork and guiding patients to where they needed to be. This was the 11th Iowa Mission of Mercy free dental clinic. The clinic is held in a new location each year.