You are here: Home / Education / Work getting underway for new University of Iowa Psychological and Brain Sciences building 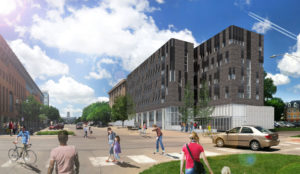 Ground is being broken this afternoon on what will be the new Psychological and Brain Sciences building at the University of Iowa.

Professor and department chair Mark Blumberg says the six-floor, $33 million project will take shape where Seashore Hall once stood, located just east of Van Allen Hall. “The basement is going to have advising for students and classrooms and a lecture hall,” Blumberg says. “The first floor is where the administrative offices will be and the four stories above that will have labs. Most of the stories will have three labs, plus offices for faculty.”

He says the 64,000 square-foot facility is designed to propel teaching and research in modern psychology and brain science into a new realm. The psychology department has a long, rich history on the Iowa City campus and Blumberg says it’s among the oldest and most eminent in the country, so this building is decades in the making.

“We never had a home that actually looked like or felt like a home,” he says. “Our students, with a huge major on campus, 1,200 to 1,400 majors depending on the year. It’s one of the largest majors on campus and we’ve never had a place where anybody could gather or sit down or have a conversation. It just never existed for us.”

Seashore Hall is mostly demolished now, though some sections still remain which are scheduled to be torn down. With today’s ceremony, a timeframe is now in place for the new structure. Blumberg says, “We’ll start the move-in process in November of next year and then we’ll start having classes and we’ll have the full, final move-in in January of 2020.”

The building promises to house state-of-the-art classrooms, cutting-edge labs, and — for the first time in anyone’s memory — commons space for psychology students. Blumberg says two of the top five psychologists in the nation during the 20th century earned degrees at the U-I.