You are here: Home / News / Candidates for governor invigorated, informed by voter interaction 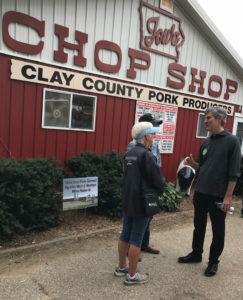 Fred Hubbell chats with Tim and Linda Hemphill at the Clay County Fair.

Polls show the governor’s race in Iowa is among the closest in the couutry.

Radio Iowa recently followed both Republican Governor Kim Reynolds and Democratic candidate for governor Fred Hubbell for an extended period the campaign trail to hear what the candidates — and voters — are saying.

On the second Sunday of September, Fred Hubbell was among more than 60,000 people who walked onto the Clay County Fairgrounds in Spencer. As Hubbell stopped for a pork chop at the Pork Producers’ stand, Linda and Tim Hemphill of Milford told Hubbell he looks younger than he appears on TV.

The candidate introduced himself to others passing by. 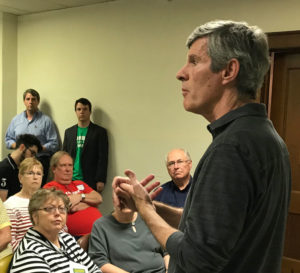 “Fred Hubbell,” he said, shaking hands with a couple walking behind a baby stroller.

“I know, I recognize you,” the woman said. A few seconds later she put a Hubbell sticker on her shirt.

Hubbell has never held public office, but many fairgoers said they recognized him because of all those TV commercials — Hubbell’s own ads and the ads running against him.

On the last Saturday in September, Kim Reynolds was walking and occasionally jogging in the Swamp Fox Parade in Marion. 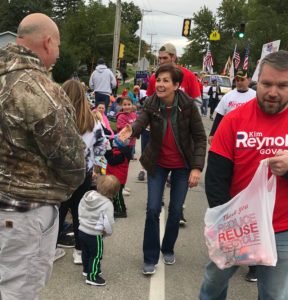 As a team of supporters handed out candy and carried campaign signs, Reynolds waved, shook hands and bumped fists with kids in the crowd. “Good morning,” Reynolds said from the center of the street.

A woman in a lawn chair along the route yelled: “I am all for Governor Reynolds!”

Reynolds ran over and hugged the voter. “What a great way to start the parade,” Reynolds told the woman before jogging to the next grouping of parade watchers.

Later that morning, Reynolds joined a local legislative candidate on a suburban street, knocking on the doors of likely GOP voters. Kim McKenna of Marion told Reynolds she’s undecided on the governor’s race.

“Is there any particular issue that you’re really concerned about?” Reynolds asked.

McKenna replied: “I’m worried about the school because my daughter is a teacher and I’ve got kids in high school and that’s the one thing I’m worried about and I know there’s so many cuts and so many needs.” 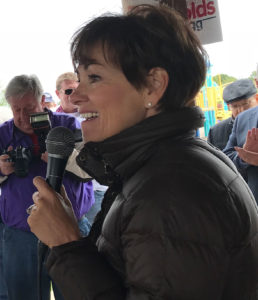 Reynolds mentioned this conversation a couple of hours later at a Linn County Republican picnic.

“Actually had someone at the door ask us about K-12 education and I love that because the message that (Democrats are) putting out there is false. Absolutely false,” Reynolds said. “The facts are we’ve made historic investments in education, only three other states in the country that have invested at a higher rate.”

Two weeks earlier, as Hubbell campaigned in northwest Iowa, voters were focused on the same issue.

“Schools here in Storm Lake are struggling,” a woman in the second row of a gathering at the headquarters for Buena Vista County Democrats said to Hubbell. “…What do you propose for school funding?”

Hubbell replied: “I would like to make sure that we manage our budget so our schools get at least the cost of living every year, so on average (the state funding increase) would be around three percent.”

Democrats in Storm Lake and Carroll waited in lines that Sunday afternoon to tell Hubbell their other complaints about the state’s privatized Medicaid program and a lack of mental health services.

“Being a candidate gives you the opportunity if you really go out and meet with as many people as you can and you listen to them, you learn about what’s going on,” Hubbell said in an interview with Radio Iowa. “You don’t just read about it. You don’t just think you know. You actually hear it from people who are living it, day by day.”

On the day the governor met for lunch with about 50 Linn County Republicans, a few in the crowd gave Reynolds campaign advice.

“They’re saying: ‘When are the positive ads coming?'” Reynolds recounted for reporters later. “So I hear that a lot.”

“I love what I’m doing. I believe in this state and I’m looking forward to the opportunity to continue to serve,” Reynolds said during an interview. “Part of it is I’m just a people person and it keeps me motivated.”

LISTEN to the story

Iowans will have three opportunities in October to watch the candidates on the same stage. Reynolds and Hubbell are scheduled to debate one another Wednesday evening in central Iowa. The event is sponsored by The Des Moines Register and will be broadcast on KCCI, the CBS affiliate in Des Moines.