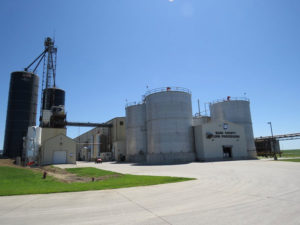 Iowans who produce corn and ethanol say they are pleased with the announcement today by President Donald Trump that he has directed the EPA to move forward with the process for the year-round sale E-15.

Quad County Corn Processors in Galva produces ethanol that is mixed with gas for the E-15 blend. CEO Delayne Johnson spoke with reporters after the announcement. “Consumers win by having more fuel choices and E-15 will save them money each time they fuel their vehicle,” Johnson says. “Farmers have also been in crisis the last few years due to low prices. Today’s announcement is welcome by farmers since additional ethanol use in fuel means more demand and higher corn prices for farmers.”

He says it’s not just important for those in corn and ethanol production. “All Americans win today because year-round E-15 reduces dependence on foreign oil, which strengthens our national defense. I appreciate President Trump’s announcement on E-15 year-round, which supports American farmers in rural communities in the midwest instead of OPEC nations in the middle east,” Johnson says.

The change to year-round use of E-15 would likely begin with the next summer driving season. “I believe it’s going to drive lots of change and we are looking forward to things as they come aboard next summer,” Johnson says.

Iowa Corn Promotion Board Director Kelly Nieuwenhuis also talked about the announcement. “As a farmer we want markets for our products and we feel this a great opportunity to grow our markets and grow our biofuel demand,” according to Nieuwenhuis. The two made their comments in a conference call following the announcement at the White House.