You are here: Home / News / Trump tells EPA to pave the way for year round E15 sales 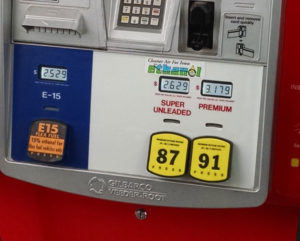 A White House official says President Trump has ordered the EPA to set the wheels in motion for the year-round sale of gasoline blended with 15 percent ethanol.

Currently, gasoline with 10 percent ethanol may be sold at any time of the year in the United States. The oil industry has fought to preserve rules that have prevented higher percentages of ethanol from being added to gasoline during the summer.

The announcement last night about year-round E15 sales sets Trump firmly on the side of corn growers. The president is expected to tout his administration’s move to promote ethanol during a rally in Council Bluffs this evening.

Governor Kim Reynolds plans to attend the rally. She issued a written statement last night, saying the president’s action on ethanol is “a big win for Iowa.”

Iowa is the epicenter of the ethanol industry. There are 43 ethanol plants in Iowa, accounting for more than a quarter of all the ethanol produced in the U.S.