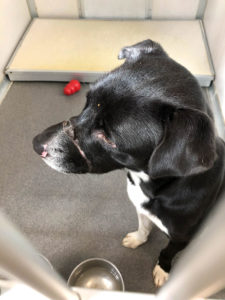 Beau is one of the dogs bungee cords were allegedly used on.

An Ankeny woman is facing charges for allegedly wrapping bungee cords around the muzzles of her dogs to keep them from barking. Josh Colvin, with the Animal Rescue League of Iowa, says the woman brought two adult dogs and a puppy to the ARL one week ago and claimed they had been abandoned in Des Moines.

“We were able to determine that wasn’t the case,” Colvin said. “So, we did our investigation and transferred our information to the Ankeny Police Department.” According to Colvin, the woman had been given a deadline to get rid of the dogs because of barking complaints.

“To resolve that, (she) was putting bungee cords around their muzzles, which is pretty horrific in my mind,” Colvin said. Inside their single kennel, ARL officials found two thin bungee cords that appeared to match the indentations on the adult dogs’ muzzles. Colvin believes the severity of the scars indicates the cords had been in use for quite some time. 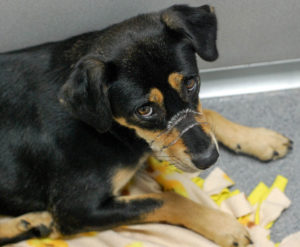 “It’s kind of hard to judge how long, but it’s got to be an extended period of time, maybe a couple of weeks? We’re not really sure on the timeline,” Colvin said. “It’s just really unjustified on how to handle that situation.” The woman should’ve brought the animals in or sought help from the ARL long ago, according to Colvin.

“This should’ve been avoided by either bringing the dogs to us or (another) rescue, for before even thinking of doing this,” Colvin said. “If she would’ve kept the dogs (and offered) some positive reinforcement type things for training…so, there were options. It really hurts us to see it went to this extent.”

Ankeny Police have not identified the woman, but say she is charged with animal neglect, a simple misdemeanor. “One of the things that we’re aggravated about is the Iowa law. We’ve been trying to get some stiffer penalties for abuse and neglect type situations, so we’d really encourage people to get involved to try and get that changed,” Colvin said.

The ARL has named the two injured dogs Maddy and Beau. Donations to help Maddy and Beau can be made online at ARL-iowa.org/donate.

(Photos courtesy of the ARL)