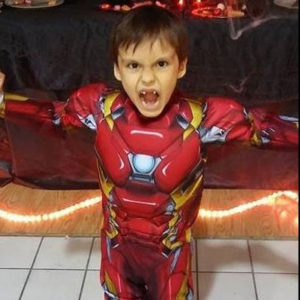 A southwest Iowa boy who’s being treated for brain cancer got a video message of encouragement this week from one of his Hollywood heroes, actor Robert Downey Junior.

Amy Tijerina of Council Bluffs, says her 7-year-old, Jackson, was diagnosed in 2016 and was told he needed immediate chemotherapy.

She says that’s where the boy’s obsession with the Marvel superhero began — and Downey has played Iron Man in several blockbuster films.

“His biggest wish was that he got to meet Iron Man and he didn’t just want to meet Iron Man in a costume, he wanted to meet the Robert Downey Junior,” Tijerina says. “I put it out there on Facebook, if anybody knew somebody that I could contact, and I had a couple of friends get back to me and say, ‘I have connections in Hollywood, let me see what see what I can do’.”

One of those friends came through and got Downey to record a 27-second video message of hope especially for the ailing second-grader.

“Jackson, is that you? Hi, it’s Robert Downey Junior, but you can call me Tony,” Downey says. “I’m thinking about you. Stay strong and know that my prayers are with you and also, life is challenging and you’re just the man for the job, so, lots of love.”

Tijerina says it’s a dream come true for her son to have gotten the video from the actor who plays Tony Stark, the man inside the Iron Man armor. She says her son has other items on his bucket list, but this checks off a big one.

“He does want to go to an Iowa Hawkeye game, he’s toured the stadium but he’s never gone to an actual game,” Tijerina says. “He wants to go to an Atlanta Falcons game. He wants to meet Peyton Manning because he’s another huge hero of Jackson’s and he’s the hero that really got him through his first major brain surgeries.”

She says her son is taking an experimental oral chemotherapy drug which the family gets through St. Jude Children’s Hospital in Memphis, Tennessee.

Tijerina says they aren’t sure how well the treatment will work, but they keep making sure Jackson is the happy seven-year-old he deserves to be.

(Karla James contributed to this report.)