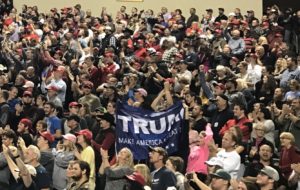 President Trump celebrated what he called “a truly historic week” with a huge crowd of Iowans — and Nebraskans — in Council Bluffs last night.

Trump began by mentioning the confirmation of conservative Justice Brett Kavanaugh to the Supreme Court.

“I especially want to thank an Iowa legend whose backbone and leadership made this great victory possible — chairman of the Senate Judiciary Committee — a very tough cookie — Chuck Grassley, Trump said. “Thank you, Chuck.”

Trump touted his order that the EPA change the rules so a higher blend of ethanol fuel may be sold in the summertime.

About 15 minutes later, Trump returned to the subject. 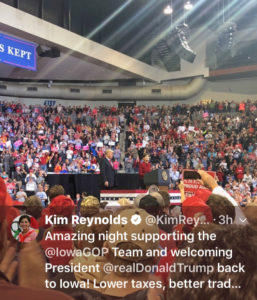 “My administration is protecting ethanol, all right? That’s what you want to hear. Today we are unleashing the power of E15 to fuel our country all year long, not eight months. All year long.”

The president then invited a couple of Iowa Republicans who’re on the November ballot to speak. Trump called Governor Kim Reynolds “a real star.”

“Mr. President, thank you for year-round E15,” Reynolds said. “Our farmers thank you. Iowans thank you…The Midwest has a partner in the White House with President Donald Trump.”

Trump praised her “good energy,” then called another candidate on stage.

“Remember this: a vote for David is a vote for me and our agenda to make America great again,” Trump said.

David Young, Iowa’s third district congressman who represents the Council Bluffs area, is seeking a third term in the U.S. House this November.

“Hey folks, elections are about choices, right? We cannot go backwards to higher taxes, more government, a weaker military and the failed policies of the past,” Young said.

AUDIO of Trump testimonials for, speeches from Reynolds and Young, 12:00

Trump attacked some of the Democrats at the top of the 2018 Iowa ballot. He made personal pitches for other Republican candidates from Iowa as well as Nebraska and joked about the make-up of the crowd.

“I could go on all night, but I want to get the hell out of here, ok?” Trump said, “because I thought I was coming to Iowa and there’s more people from Nebraska.”