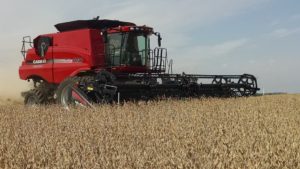 This is a rare sight as most farmers are still unable to harvest.

Many Iowa farmers are frustrated as crops are starting to mold in the muddy fields, continued rain is making it impossible to harvest — and now a hard freeze and frost are threatened.

Angie Rieck Hinz, a field agronomist with the Iowa State University Extension, says it’s been a challenging growing season all through spring and summer, so fall shouldn’t be any different.

“We have a lot of water standing in places, we’ve had a lot of rain, farmers haven’t really been in the field since Saturday,” Rieck Hinz says. “We’ve seen stock quality deteriorate, now we’re seeing grain quality deteriorate with all of this rain and moisture. We’re looking out for grain molds in corn while we’re out there.”

After high temperatures in the 70s and 80s a matter of days ago, much colder air has moved in with lows now dipping into the 20s and 30s. Most crops are ready to come out but the heavy combines can’t get into the fields without getting stuck in the muck.

“All of the corn has reached maturity in the central part of Iowa, though if you go a little further north, there was green standing corn about a week and a half ago,” Reick Hinz says. “Soybeans, in central Iowa, 99% of them are mature and the frost will probably do little damage to the soybeans themselves.”

The National Weather Service is posting a Freeze Warning for much of Iowa’s northern half tonight (Thursday) with a Frost Advisory posted for southeast Iowa.

“People are frustrated and just want this crop year to be over with,” Reick Hinz says. “I’m afraid it’s going to be a few more weeks for a lot of people. There are going to be places where we’re simply going to have to have the ground freeze up to get some crop out. Farmers know there’s nothing they can do.”

Forecasters hint that somewhat warmer weather may arrive next week.