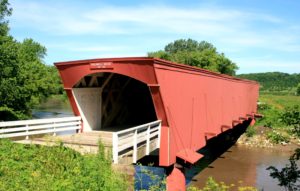 Thousands of people are expected in Winterset this weekend for a celebration of the area’s famous covered bridges.

Heather Riley, executive director of the Madison County Chamber of Commerce, says this is the 49th year for the Covered Bridge Festival. It’s usually the busiest weekend of the year for visitors to the county’s six historic bridges – some of which are over 140 years old. “We have all kinds of maps and information here in our office and everyone is welcome to go out on their own to visit the covered bridges, but a better idea is to hop on one of the buses hosted by our local Rotary club and get a bridge tour that way,” Riley said.

The Madison County Covered Bridge Festival, scheduled for 9am to 5pm both Saturday and Sunday, typically draws around 20,000 people over the two days. The bridges inspired a 1992 best-selling novel that was adopted into a movie starring Clint Eastwood and Meryl Streep. “Around the time the book and movie were so popular, we just had massive amounts of motor coaches here for the festival. We don’t really see that so much, although we do see some motor coaches, they aren’t coming by the dozens like they did 25 years ago when the book and movie were very fresh,” Riley said. 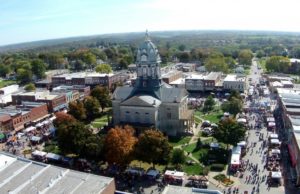 Fundraising continues for the effort to rebuild one of the county’s covered bridges. The Cedar Bridge has been destroyed by arson twice, with the most recent fire about a year-and-a-half ago. “Our hope is that we’ll be cutting the ribbon on the rebuilt Cedar Bridge this time next year, in time for our 50th celebration of the Covered Bridge Festival,” Riley said.

In addition to tours of the famous overpasses, the Covered Bridge Festival includes a parade, arts and crafts vendors, demonstrations, kid’s activities, and live music – all centered around the Madison County Courthouse in downtown Winterset.