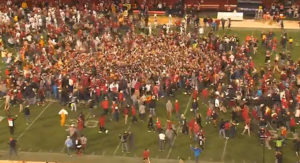 ISU has been fined after fans rushed the field following the upset win Saturday.

Iowa State University’s president Wendy Wintersteen says she will appeal a find levied by the Big 12 for fans rushing onto the field after the football team’s upset win Saturday.

ISU says the Big 12 Conference notified them they would be issued a reprimand and fined $25,000 for not following the school’s preestablished post-game celebration policies Saturday night. The Cyclones beat previously undefeated and sixth-ranked West Virginia University 30-14 in that game and fans rushed onto the field in celebration.

A statement from ISU says school officials reviewed the actions that were taken by law officers and security staff including video provided by the Big 12 Conference and other sources and concluded that law officers and event staff not only followed all post-game celebration policies — but had also taken several additional measures to help make the situation safer.

West Virginia coach Dana Holgorsen called the storming of the field unprofessional during the weekly coaches conference call Monday. Holgorsen said none of the West Virginia players were injured but said the crowd rush was “not good.”

“Our institution takes the safety and welfare of all student-athletes, officials, and fans very seriously. We have reviewed all of our procedures, including several videos of the post-game celebration, and we do not agree with Commissioner Bowlsby’s assessment of the events that evening. Chief [Michael] Newton, of the Iowa State University Police Department, and the CSC staff had a very thorough and specific plan. Those plans were discussed and implemented prior to the game and were evaluated and adjusted during the game to ensure the safest atmosphere for every one attending the game, including the West Virginia players and staff.”

“Our local law enforcement officers and the CSC security staff did an outstanding job keeping all the student-athletes, game officials and fans safe during the postgame celebration on Saturday,” Pollard said. “I have personally watched the video multiple times and I am confident the officers and security staff followed the procedures we had previously submitted to the Big 12 Conference office. It is also important to note the protocol and practice used Saturday night by our law enforcement officers was nearly identical to the protocols used last year during the field rush following our win over TCU. The Conference had no issue with ISU’s protocol or practice at that time and the results were the same as Saturday night. The visiting team was safely escorted from the field in less than 90 seconds in both situations.”