You are here: Home / News / Phantom of the Opera sequel to debut in Iowa 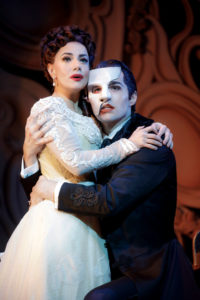 A sequel to one of the most successful musicals ever to hit the stage in Iowa is making its Iowa premiere today. “Love Never Dies” is the follow-up to “Phantom of the Opera,” which broke state box office records in the late 1990s.

Bronson Norris Murphy plays the Phantom in the new touring production which offers a combination of both love and horror stories.

“We dovetail ten years after the events from ‘Phantom of the Opera,’ which you may’ve seen on tour or on Broadway, but you don’t have to have seen that to ‘get’ our show,” Murphy says. “We are a complete show with a beginning, middle and end. There’s nothing that we rely on you knowing before you come. We present all of the information to you. It’s a brand new score from Andrew Lloyd Webber, some of the most beautiful music he’s written.”

The original Phantom was played by British actor and singer Michael Crawford to much acclaim in the 1980s. Murphy, a Kentucky native who now lives in New York City, says he’s worked diligently to make the Phantom’s mask his own.

“It’s wonderful when people come up to me and say, ‘Oh, you remind me of Michael Crawford,’ I take that as a great complement, but that’s certainly not what I set out to do,” Murphy says. “I set out to use the text I have in front of me, to use the music that I’ve been given to tell a truthful story using my life experiences. I haven’t set out to accomplish anything to compare to any of our great phantoms from the past.”

Webber, the show’s creator, started working on “Love Never Dies” in 1990 though it didn’t open until 2010 where negative reviews quickly closed the production in London. Murphy says Webber and producers started over from scratch and created the new musical that’s now on tour. Murphy has played the role for more than a year now and says it’s a thrill to have met and worked with the legendary Webber.

“He lovingly wrote in his biography, which came out after we opened, that opening night of ‘Love Never Dies’ was one of his favorite nights in the theater — of his career,” Murphy says. “I really appreciated reading that because he has loved this show for many years as it’s been trying to find its footing.”

The new production premiered in Australia and has since seen wide acclaim in Germany, Japan and Denmark before coming to the U.S.

This is the Iowa debut of “Love Never Dies,” which will be at the Des Moines Civic Center through Sunday.