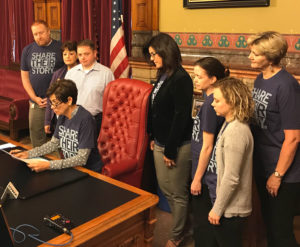 The governor has declared October as Domestic Violence Awareness month.

“It’s a way to allow survivors of domestic violence and other violent crimes to get a portion of their lives back without the fear of their address becoming public,” Hall says. “They’re able to do things like register to vote and things that normally where their address would be put on public records, now they have a substitute address for that and their actual physical address is no longer on the public records.”

An estimated 29,000 Iowans will seek help this year to escape a violent domestic or dating relationship. A coalition of groups including the Secretary of State’s office and the Iowa Coalition Against Domestic Violence have partnered on the www.sharetheirstory.net website. It invites survivors and their families and friends to explain how domestic violence has directly impacted individual 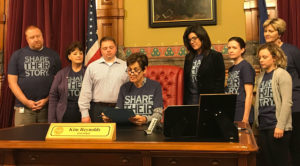 “It is a problem, unfortunately,” Hall says. “There are about 3,000 convictions per year for domestic violence-related instances and we want to raise awareness to it and, ultimately, put a stop to it.”

The website also features links to groups offering services to those seeking help.