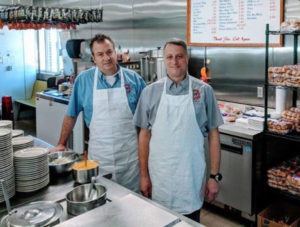 The Eliades brothers in their restaurant.

One of Sioux City’s best known restaurants is about to mark a major milestone.

The Milwaukee Wiener House opened near the Milwaukee Railroad Line in 1918. In 2013, the restaurant closed its original location to make way for the Hard Rock Casino and reopened a few months later in downtown Sioux City. John Eliades and his brother, Mike, have run the place for a quarter of a century, serving a lot of repeat customers.

“We have families that say this is our third generation, fourth generation, even fifth generation. It’s humbling,” Eliades says. “These people come back to see us and to buy our product and we have been here 100 years for Sioux City and we are very thankful.”

“It’s incredible,” Eliades says. “People tell us: ‘We just got off the plane. We haven’t even seen our parents yet.'”

Eliades’ father and a business partner ran the business from 1960 until 1993. Mike Eliades says the celebration to mark the 100th anniversary of the restaurant starts next Monday.

“We’re going to have the street temporarily named after us and we’ll have that up until just past the Thanksgiving holiday,” Eliades says. “We’re going to officially introduce our 100th anniversary ale.”

The brew is being provided by a nearby tavern in Sioux City. On Friday, the 26th, hot dogs at Milwaukee Wiener House will go on sale for 100 pennies.

The Wiener House is known for its classic “Coney Island-style” hot dogs topped by homemade chili and raw onions.