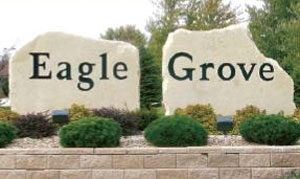 Wright County leaders are signing an agreement to buy a large tract of land south of Eagle Grove to develop an industrial park near a large, soon-to-open pork processing plant.

Cindy Litwiller, the county’s economic development director, says the hope is, if they build it, businesses will come. “It’s something that we have been working on for several months and we’re glad we can announce it today,” Litwiller says. The land sits beside the $240 million Prestage Foods facility which aims to launch operations soon.

“The supervisors have purchased 80 acres right across from the Prestage facility,” Litwiller says. “Any type of business can locate there, including perhaps some in the supply chain for Prestage as well.” The industrial park should be ready for new businesses to move in by January.

“We still need to close on the property but I would certainly hope that we could see some activity there after the first of the year, at least,” she says. The Prestage facility may have a “soft” opening as soon as December, eventually employing about a thousand workers.

Initially, the plant will slaughter 10,000 hogs per day, with half of those hogs coming from Prestage’s own barns. The other half will come from independent producers.