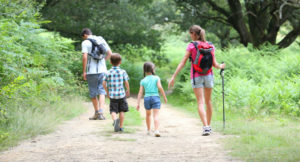 The Iowa Transportation Commission recently approved more than one million dollars in funding for five projects under the State Recreational Trails Program.

The director of the DOT Office of Systems Planning, Craig Markley, says a $360,000 grant will go to replace a bridge over Wolf Creek on the Cedar Valley Nature Trail in Black Hawk County. Markley says the 21-foot long bridge has been closed since September of 2015 and that has caused a lengthy detour on county roads. The old bridge was made of wood and the new one will be made with concrete and be wider, The $850,000 project is expected to help the flow of the creek. The Davis County Regional Trail project received $230,000.

Markley says this will develop the final segment of the multi-use trail and connect the Mutchler Community Center in Bloomfield on one end to the Davis County McGowen Recreation Wildlife Area on the other. “That wildlife area is 313 acre outdoor facility with about 3.5 miles of trails, fish ponds, unique prairie, campgrounds and a community garden,” according the Markley. The total cost of the project is 461-thousand dollars.

The Story County Conservation Board won $300,000 dollars to pave part of the Heart of Iowa Nature Trail. “This project will pave two-point five miles of that existing limestone trail — connecting the cities of Slate and Huxley in Story County,” Markley says. The total project will cost $939,000.

Keokuk County received $328,000 to for a segment of the Lake Belva Deer Area Trail “Paving 2.65 miles of a granular surface trail to connect an existing trail head near Sigourney,” Markley says. “So, it would connect the trail head in Sigourney to the Belva Deer Park. That park is a 1,669 acre county park which includes a 260-acre recreational lake, modern campgrounds, as well as a primitive trail system.” The cost of that project is $1.18 million dollars.

The other project will connect the Fort Madison Hospital to an existing trail — which includes a portion that passes through a wetland area on an elevated boardwalk. The project won a $91,000 grant. Markley says a mix of money is used for the projects.

He says it requires a minimum 25 percent local match and the Iowa Legislature annually puts money into the trails funds and this year they put in one million dollars. Markley says some past project came in under budget and a few did not get done, so there was one-point-three million dollars available. The State Recreational Trails Program was created in 1988 and Markley says the trail system has gone from being small local projects to become a regional and state system as more and more pieces have gotten done and that makes a longer and longer trail, and you can now get on a trail and ride for a day more.

Markley says there is a federal trails program too, that also has helped provide some of the money for the segments in Iowa.