You are here: Home / News / Lottery terminals expected to be busy as estimated Mega Millions jackpot is $1 billion 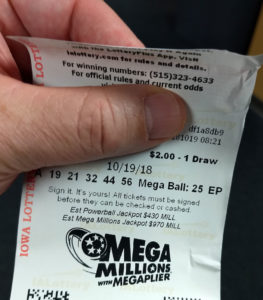 Many people are hoping to hit it big with Mega Millions and Powerball tickets.

The Mega Millions jackpot estimate was updated to one billion dollars today and the Powerball prize is now estimated at 470 million for Saturday’s drawing.

This big jackpot comes not long after Iowa Lottery vice president Mary Neubauer and others noted they had record sales for the fiscal year that ended in June despite the lack of any major jackpots in the lotto games. “What’s going on right now just goes to show you never know when these big jackpots are going to come up — it’s totally the luck of the draw,” according to Neubauer. “What’s happening now with both Mega Millions and Powerball is that they’ve been growing for almost two months in the case of Powerball and for more than two months in the case of Mega Millions.”

And now Mega Millions has grown to a record level. “It’s the biggest jackpot that’s ever been offered in Mega Millions since that game began. It has far eclipses the previous record, which was $656 million,” Neubauer says. “The Mega Millions jackpot is the second largest jackpot that’s ever been offered worldwide. It is behind only the Powerball jackpot of nearly $1.6 billion that was split by three tickets back in 2016.” Ticketholders in California, Tennessee and Texas won a share of that jackpot.

One trend that is already showing up is 93 percent of the Mega Millions tickets purchased and 89 percent of the Powerball are “easy picks” or numbers chosen randomly by the lottery terminal. “It’s one of the highest numbers I’ve ever seen. And I don’t know if that means we have lots of first-time players that are playing and aren’t as familiar with playing the games — or if people in general are using easy picks more often,”Neubauer says.

Neubauer says more jackpots are won on easy pick tickets. “Now I don’t want someone to think that that means that easy picks are luckier – they aren’t the odds are the same for any ticket that you buy. It’s simply that because there are so many more easy pick plays, there are more wins from easy pick plays,” Neubauer explains.

The estimated jackpot was updated this morning. Neubauer says there will likely be a lot of tickets sold today. “The day of the drawing always has the biggest sales because for whatever reason people have put it off,” Neubauer says. “And then usually between four and six p.m. as a lot of people are getting off work and going home, that’s when the highest sales are.”

Neubauer says they always stress the importance of playing responsibly, as you only need one ticket to have a shot at the jackpot.