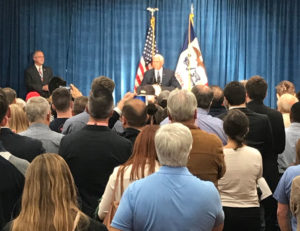 Vice President Mike Pence rallied with about 200 of Republican Congressman David Young’s supporters this afternoon in Des Moines. Pence told the crowd the race in Iowa’s third congressional district may determine whether Republicans retain majority control of the U.S. House or Democrats take over.

“This race is going to be critical to whether we’re going to be able to continue with the momentum that we have,” Pence said.

Pence returned to that theme several times during his 24 minute speech.

“Now again Nancy Pelosi and her hand-picked candidates want to take us back,” Young said, eliciting boos from the audience. “We can’t have that.”

Pence trumpeted the economy in general and cited Young’s work on veterans issues in making the case for Young’s election, then Pence mentioned Cindy Axne, the Democrat who’s challenging Young’s bid for a third term.

“The choice between David and his opponent is so clear,” Pence said. “You know, his opponent Cindy Axne — I know the president called her ‘Cindy Tax-Me’ and there’s a good reason why. Cindy Axne said the first thing that Democrats need to do if they retake the majority in the congress is to repeal those tax cuts. You know, there’s a term for repealing a tax cut. It’s called a tax increase and we’re not going to let it happen.”

Trump said last week in Council Bluffs that a vote for Young was a vote for Trump’s agenda. Pence, in his remarks this afternoon, made the same case.

“(Young’s) been there, standing with this president every step of the way,” Pence said.

The vice president drew the largest burst of applause when he promised that Trump would withhold aid from Central American countries if a caravan of 4000 asylum seekers from Honduras winds up at the southern border.