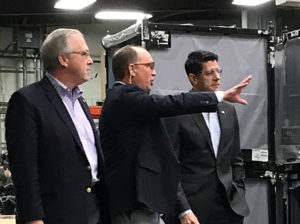 “The reason we’re here is we want to see if the policies that David and I have been working on in congress are working or not,” Ryan said, “and it’s spectacular to see that you’ve added 44 jobs in just the last year.”

The company — i2-tech — melts plastic pellets into parts that other manufacturers use to make things like John Deere tractors or Kawasaki motorcycles. Young said new expensing rules in the federal tax code “provided certainty” and prompted the company to buy new equipment.

“I was here three years ago. There wasn’t as much activity out there on the floor, not as many employees, and to see what’s happening today — it’s just like it’s a brand new business,” Young said. “There’s such a great economic renaissance going on all throughout the country and here in the third district especially.” 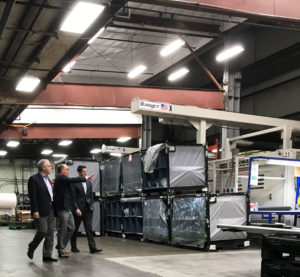 “David Young has worked his tail off in congress for his constituents here in Iowa,” Ryan said. “David Young is an impact player who has done so much work on water issues, one on the things that has been a big issue, on agriculture issues, but on economic growth, on tax reform.”

Reporters were allowed to observe the tour the two politicians took of the facility and listen to Ryan and Young speak to employees, but questions from the media were not permitted. Later, Ryan did interviews with two Des Moines TV stations.

Late this morning, Cindy Axne, the Democrat who’s challenging Young’s bid for a third term in the U.S. House, is releasing a list of campaign finance reforms she’d vote for in congress.