You are here: Home / News / Senator Grassley says president can use troops to keep border secure 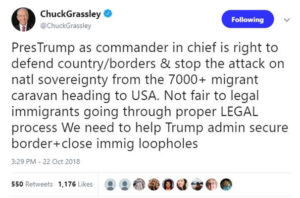 Iowa Senator Chuck Grassley says he would support President Donald Trump sending armed troops to the U.S. border with Mexico to stop what Grassley calls an “invasion” by a large caravan of immigrants.

As many as 7,000 people, on foot, are headed northward to seek asylum. Grassley says soldiers would be deployed to the border — as in the past — to support U.S. Border Patrol agents.

Some critics of using troops fear the potential for a civilian bloodbath on the border, harkening back to the Kent State shootings in 1970.

Grassley says Trump is justified in his threat to send troops to defend our nation’s southern border and to stop what Grassley describes as the “attack on national sovereignty” from the caravan.

“A massive move across the border with Mexico as you saw with the same people violating the laws of Mexico, crossing from Guatemala into Mexico, forcing their way in,” Grassley says. “It seems to me, to protect the borders of the United States from that sort of invasion is perfectly legitimate.”

Reports differ on the status of individuals in the caravan. Some are said to be families with children fleeing violence and poverty. Others are depicted as criminals who’ve already been deported from the U.S. who are trying to return and be reunited with their families who remain. Grassley said in a tweet Monday that the caravan is “not fair to legal immigrants going through the proper legal process.”

“I hope I made myself clear that I don’t consider civilians from other countries being a military force invading us, but they’re surely violating our laws,” Grassley says. “We’ve got a right to protect our borders.”

On Monday, the president vowed to cut off or greatly reduce U.S. aid to nations like Guatemala, Honduras and El Salvador if they don’t find a way to stop their citizens from trying to illegally enter the U.S.

Iowa Congressman Steve King suggests President Trump cut off all U.S. aid to countries along the route if the caravan reaches the U.S. border. King says money saved could be used to build a wall.