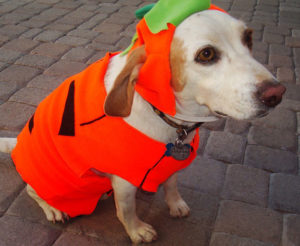 More than 31-million Americans will spend a half-million dollars this month on Halloween costumes, not for themselves, but for their dogs and cats.

Pam Wiese, spokeswoman for the Humane Society in Omaha/Council Bluffs, urges Iowans who plan on putting their pet into a costume to use common sense. “Make sure that it fits them appropriately so it doesn’t trip them,” Wiese says, “that it doesn’t hang down and impede their eyesight because if it’s binding or scary, they may try to run away from it and, in a sense, run away from you.”

Also, be sure the costume doesn’t restrict breathing, and make sure there are no small pieces a dog can chew off and ingest. Wiese says no matter the cute factor, some pets won’t tolerate a costume, so don’t force it.

“If it looks like he’s terrified or is shaking or he’s uncomfortable in it, I would definitely just take it off,” Weise says. “If the pet isn’t enjoying it, you’re doing him a disservice. The best idea is, if he’s enjoying it, fine, if he’s not, get it off him.”

People pose with their pets in family photos and have their pets sit on Santa’s lap at Christmas, so it’s little surprise Halloween costumes for animals are becoming such big business. Some folks even plan ahead and have trick-or-treat bowls filled with animal goodies for neighbors’ critters.

“People love to include their pets in all sorts of activities, so why not dress them up?” Weise says. “As people began buying more costumes to dress pets up, more places began making cuter costumes and costumes that are more intricate and more fun, so it’s kind of feeding on itself.”

A survey finds the most popular pet costumes this year include: pumpkins, hot dogs, devils, Star Wars characters and superheroes.