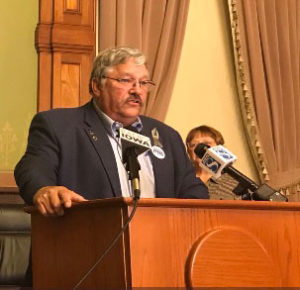 The head of the union representing the largest share of state government employees is accusing the Department of Corrections of “downplaying” the severity of an incident at the Iowa State Penitentiary in Fort Madison.

State prison officials, in a news release last Friday, said a guard was treated and released from a hospital after being punched and kicked by an inmate. AFSCME Council 61 President Danny Homan calls it an “incomplete portrayal” of the attack. He says video shows the inmate threw six punches and 13 “stomps to the head” while three other inmates attempted to slow down responding staff.

“Our staff and their well-being is the highest priority of this department. The department stands by its initial press release that was published after the assault occurred. It was both accurate and timely. After any assault on staff or other inmates, the department initiates an investigation into the incident. Any attempt to preemptively release the confidential details and evidence compiled as part of that investigation undermines the integrity of the investigation and the security of the correctional system. Attempts to politicize attacks on our staff damages the overall security of our facilities and the safety of our staff.”

“The Department of Corrections holds the safety and security of their team members with the highest priority.”

AFSCME Council 61 President Danny Homan issued the following statement in response to the Iowa Department of Corrections’ incomplete portrayal of yet another correctional officer being attacked by an inmate at the Iowa State Penitentiary in Fort Madison:

“On Friday, the Iowa Department of Corrections distributed a press release detailing the assault on a correctional officer by an inmate at the Iowa State Penitentiary. Unfortunately, the DOC failed to release the full scope of the incident. In recent days, reports from eyewitnesses detail a situation far more serious than what the Department has led the public to believe.

“A total of four inmates were involved in the assault: one who threw six punches and 13 stomps to the head and three others who helped plan the assault and attempted to slow down the responding staff while the assault was taking place. Video footage shows the group of inmates plotting at a table and watching the correctional officer make his rounds. The inmate who assaulted the correctional officer had just completed a long-term restricted housing program intended to make him less dangerous. Additionally, cocaine and a shank were discovered during the shakedown and inmate property search following the incident.

“Until yesterday, the Warden at ISP had refused to meet with union members over their concerns about the safety and security of staff within the facility. The dangerously low staffing levels at all of our correctional facilities mean that incidents like this one will continue to escalate in severity. When will Governor Reynolds and the legislative Republicans who have created this budget disaster realize that their carelessness is going to get someone killed?”