You are here: Home / News / Bishop who delivered sermon at royal wedding is in Iowa 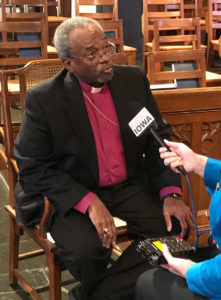 The American cleric who delivered the sermon at the wedding of Prince Harry and Meghan Markle this spring is in Iowa this weekend. Presiding Episcopal Bishop Michael Curry said the wedding gave him a wonderful chance to talk about the core of the Christian faith to an audience he wouldn’t otherwise have reached.

“I just think it’s important to articulate a view of Christianity that is grounded in love. That’s what Jesus was and is about and there’s no question about that, but that’s not what you often hear,” Curry told Radio Iowa this afternoon. “…It was good to have an opportunity to kind of speak a ‘good news’ word.”

Curry was elected primate of the Episcopal Church in 2015. He will address the annual convention of the Episcopal Diocese of Iowa on Saturday. Curry predicts “mainline” protestant churches are heading toward a realignment.

“The Christian church is not primarily an institution. It’s a movement and it’s a movement that has taken different forms overtime,” Curry said. “It is a movement that existed when it was an underground movement. Christianity was like the ‘Underground Railroad’ of Harriet Tubman and that’s when it spread the best and, see, I want to suggest we need to go back and capture that spirit.”

Rather than focusing on houses built exclusively for worship, the bishop suggests the rebranding may lead to creating tight-knit Christian communities through meetings in homes, which was how the “Jesus movement” started centuries ago.

“Because Christianity is so old — it’s been around a long time — it’s very easy to let some of the trappings that have been added on begin to identify what Christianity and what being a Christianity is all about, rather than going back to the actual core essential: the spirit and the teachings of Jesus of Nazareth,” Curry said.

There are 59 Episcopal congregations in Iowa, with nearly 8000 baptized members. Curry spoke with Radio Iowa early this afternoon in the main sanctuary at the Cathedral of St. Paul in Des Moines.