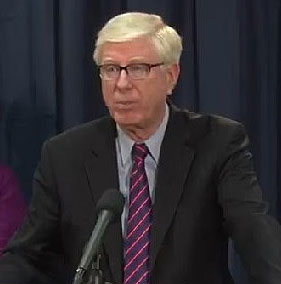 The Democrat who’s Iowa’s attorney general faces a Libertarian opponent in 2018, but no Republican challenger.

Miller, who is 74 years old, has indicated this will be his last campaign.

“I love this job. I think it’s extremely rewarding,” Miller said about the job during an appearance on Iowa Public Television. “…The job as I see it is representing the interests of ordinary people. If you’re going to practice law, that’s where I want to practice and that’s what we’ve done.”

Marco Battaglia of Des Moines is the Libertarian Party’s nominee for attorney general. He touts his non-lawyer status.

“Few lawyers with J.D.s know and understand the historical context surrounding the Constitution,” Battaglia said during an appearance on The Des Moines Register’s Political Soapbox at the Iowa State Fair. “Instead, they are taught case law which is extremely divergent from the founders’ intent.”

Battalia is an independent journalist and musician.