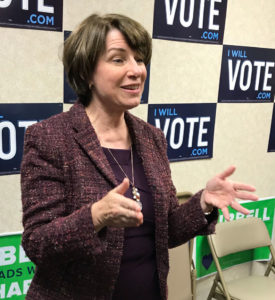 Early Saturday afternoon Klobuchar was in Waterloo, speaking on behalf of Democrat Abby Finkenaur, who is challenging Republican incumbent Rod Blum in the first congressional district.

“I would say first, we need more women in politics,” Klobuchar said, to cheers. “I think you know this.”

“As your senator next book — I wrote a book with that. My husband came up with the title. It wasn’t just for Iowa — I thought I would come to help these incredible women,” Klobuchar said. “…With Cindy and Abby running, Iowa has never had a woman in the House of Representatives, which is an incredible thing, so this is your moment to do this.”

Klobuchar is arguing the Midwest was ignored by the national Democratic Party in 2016 and 2018 is a chance for redemption.

“This is a moment in time that we are not going to have again as far as I’m concerned. It’s a time for Iowa and Minnesota to stand up together and say: ‘The Midwest matters,'” Klobuchar said in Waterloo. “…Stop seeing it as this moment to overcome. See it as this moment to shine.”