Mary Neubauer and Terry Rich of the Iowa Lottery.

A ticket sold in Iowa for Saturday’s Powerball drawing is worth $343.9 million.

On Sunday morning, Iowa Lottery CEO Terry Rich stood in a rural convenience store’s parking lot to make this announcement: “Behind me, at this Casey’s in Redfield, Iowa, we had…absolutely the biggest jackpot ticket sold in Iowa in Iowa Lottery history.”

The Iowa ticket and another one sold in New York City matched all five numbers and the Powerball number.

“I love the dichotomy of a ticket sold in Manhattan in New York and then a ticket sold here in Redfield, population 835,” said Mary Neubauer, a spokeswoman for the Iowa Lottery. 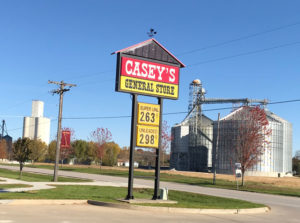 A Casey’s in Redfield sold the winning Powerball ticket.

Redfield is five miles north of Interstate 80, about 37 miles west of Des Moines. The community is a “slice of Americana” according to Neubauer. As she spoke to reporters in the Casey’s parking lot, you could hear the grain dryer running non-stop across the road.

“I love the fact that we’re standing here this morning and look,” Neubauer said, gesturing to the east. “You can see the Redfield coop, right there. You see the trucks going by. We’re right across the street from a corn field. I mean, truly, this is rural Iowa at its best.”

The size of the jackpot requires a trip to Lottery headquarters to claim the prize, but it’s unlikely the person will show up to claim it Monday when the office opens. Iowa law requires public disclosure of the winner’s name. The winner may choose an annuity or a lump sum payment. The annuity would be worth $343.9 million. It would be paid out in 30 payments over the next 29 years and state and federal taxes would be withheld. The lump sum payment would be $140.6 million after taxes.

“This is a life-changing amount of money,” Neubauer said. “We want whoever this is to consult a lawyer, to consult a financial planner, to make the plans that they need to make for the money before they come in. This is not something that you just want to do on the fly.”

Neubauer had two other pieces of advice for the person who holds the winning ticket.

“Sign the ticket, if you haven’t already done it. That identifies the ticket and any prize that would come from that ticket as belonging to you,” Neubauer said. “Number two: keep the ticket in a very, very safe place. You have to have the ticket to claim the prize.”

For security reasons, Lottery officials do not reveal exactly when the ticket was sold. The lottery’s CEO told reporters there was a sales surge due to Saturday’s Powerball jackpot.

Last week’s Mega Millions jackpot, along with the growing Powerball prize, spurred $3 million in ticket sales through Friday night. That’s an 83 percent increase from what’s typical, according to Rich.

“For every dollar that’s spent on Powerball, 50 cents goes back to the state of Iowa,” Rich said. “So it means more money for the Veterans Trust Fund, for education, for law enforcement, so it’s kind of the ‘bin buster’ of all when you can get a big jackpot like this.”

Casey’s General Stores will get a $10,000 bonus from the Iowa Lottery for selling the winning ticket. That’s standard for any retailer that sells a jackpot winner. Neubauer said the Casey’s in Redfield is likely to experience the “lucky store” phenomenon, too.

“It’s really not any luckier than any other store, sorry,” Neubauer said. “…People think that lightning could strike twice, so we anticipate that this store’s sales will go up, beyond what they normally might be, just because more people will be coming here trying to win again at this location.”

The store sits just off the curve of a county highway. It’s the only place in Redfield to buy milk — and a lottery ticket.