You are here: Home / Fires/Accidents/Disasters / Victim in fatal Highway 163 accident was from Prairie City 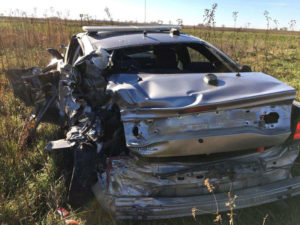 A Prairie City man was killed this morning in a crash on Highway 163 in Jasper County.

Iowa State Patrol Sergeant Nate Ludwig says 50-year-old Rex Chickering was driving a van that slammed into the back of a slow-moving pickup pulling farm machinery. Chickering died at the scene. The driver of the pickup, 53-year-old Curtis Kaisand of Monroe, was injured and taken by ambulance to a hospital in Pella.

The crash happened around 8 a.m. in the eastbound lanes and bright conditions may’ve been a factor. “That was just briefly mentioned to me by one of the troopers who was on the scene, that the sunlight happened to be right in your eyes as you’re driving down the road,” Ludwig said. “But, as far as why (Chickering) drove right into the back of that farm machinery, we may never know…but, it’s under investigation.”

Shortly after that crash, an Iowa State Patrol car was blasted by a passing motorist. The Patrol cruiser was parked on the side of the highway with its lights flashing. It was not occupied at the time. “It was a semi that partially side-swiped and hit the back end of the cruiser,” Ludwig said. “It sent the cruiser about 100 to 150 yards off (the road) and that semi continued on, down into the median.”

The trooper who’d been driving the patrol vehicle was not injured. He was directing traffic to a detour away from the initial crash. “Stuff like this happens far too often where our patrol car is lit up like a Christmas tree – there’s no reason why people can’t see it when they’re paying attention. So, we’re still seeing distracted driving at its worst,” Ludwig said. Charges are pending against the driver of the semi, according to Ludwig.