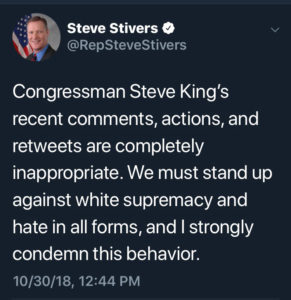 The chairman of the National Republican Congressional Committee has taken to Twitter to chastise Iowa Republican Congressman Steve King. King has responded by saying the attack is “orchestrated” by those who seek to impeach the president.

Steve Stivers is the Ohio congressman who leads the committee directing campaign cash and resources to other Republicans seeking re-election to the U.S House. Stivers posted a comment about King on Twitter, saying King’s “recent comments, actions, and retweets are completely inappropriate.” Congressman Stivers said the country “must stand up against white supremacy and hate in all forms” and he “strongly” condemned King’s behavior.

King issued a response to Stivers on Twitter, saying attacks or criticism of him are “orchestrated by the nasty, desperate, and dishonest fake news. Their ultimate goal is to flip the House and impeach Donald Trump.” King also blasted “Establishment Never Trumpers” who he accused of being “complicit.”

Fred Hubbell, the Democratic candidate for governor, this afternoon called on Republican Governor Kim Reynolds to remove King as co-chair of her campaign.

A Twitter movement started this week called for boycotts of companies that had donated to King’s campaign. Land O’Lakes executives announced today that its political action committee will no longer support King “moving forward.”

The Cook Political Report has recently moved the race  from a “likely Republican” to a “leans Republican” rating.

King’s full statement: “Americans, all created equal by God, with all our races, ethnicities, and national origins-legal immigrants & natural born citizens, together make up the Shining City on the Hill. These attacks are orchestrated by nasty, desperate, and dishonest fake news. Their ultimate goal is to flip the House and impeach Donald Trump. Establishment Never Trumpers are complicit.”

Scholten’s full statement: “When you run for Congress, or when you’re elected to Congress, you become a leader and you have a platform. You get to decide how you use your platform. For 15 months, my campaign has used ours to talk about health care, infrastructure, our agriculture economy, getting big money out of politics, and more.

“Steve King could be using his platform to promote things to help this district, yet, he’s abdicated his leadership to push his own personal agenda and support white nationalists and neo-nazis. He doesn’t do town halls or publicly scheduled events, and he refuses to debate me. Instead, he uses his platform to spread fear and division at the expense of our district.

“Last week I issued a challenge for at least one Republican elected official to condemn Steve King’s recent behavior. I applaud Rep. Steve Stivers, Chair of the National Republican Congressional Committee for his comments today. We need more representatives willing to put country over party.

Fred Hubbell, the Democratic candidate for governor, issued a statement as well.

“Time and again we have seen Steve King spew hateful, divisive rhetoric and we have seen Governor Reynolds defend her campaign co-chair,” said Fred Hubbell. “She has been confronted by her supporters and even her own party leaders condemning his reprehensible actions, but the Governor continues to have him leading her campaign. Steve King’s actions do not represent our Iowa values and I call on Governor Reynolds to remove him from his leading role in her campaign.”