You are here: Home / Crime / Courts / Sioux City Bishop: former priest was sent for treatment after admission of sexual abuse 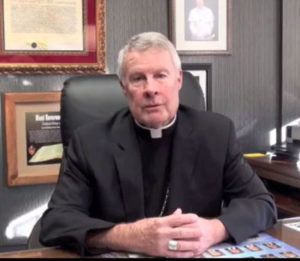 New information reveals officials in the Catholic Diocese of Sioux City knew about the alleged sexual abuse of as many as 50 Iowa boys more than 30 years ago by a priest, Reverend Jerry Coyle.

The current bishop of the diocese, R. Walker Nickless, says Coyle admitted his actions to his superiors in 1986 and he was not defrocked but was removed from parish assignments after 20 years there. “No one presently at the diocese has first-hand knowledge about Jerry Coyle and that includes me,” Bishop Nickless says. “For the past few months, we have been attempting to put the pieces together about what happened during the 1980s with the files and records we do have on Jerry Coyle. What we have learned is that in 1986, the bishop terminated Jerry Coyle’s priestly faculties.”

Nickless says Coyle was sent to New Mexico for evaluation and treatment, where he spent the past 32 years. “Psychologists in Albuquerque advised the diocese that Coyle was highly motivated to change,” Nickless says. “We know now that many disagree with this point. He was not hidden. He was sent to New Mexico in 1986 for treatment (at a facility) which specializes in treatment of the clergy. This was protocol at the time.”

Bishop Nickless says Coyle befriended a couple with children in New Mexico and they asked him to move in with them after he was in a serious car accident. The diocese felt that was a bad idea and attempted to dissuade Coyle and the couple from going forward, disclosing the extent of Coyle’s past. The diocese moved Coyle to Fort Dodge, where Nickless discussed the situation at a public meeting Tuesday night.

“Police were not contacted when Coyle self-admitted his abuse but policies have changed since 1986,” Nickless says. “Now, the policy is to contact civil authorities, which we will follow, since we have now the names of the victims of Jerry Coyle.”

The diocese is providing independent victims’ care to offer confidential, compassionate assistance to anyone who was a victim of Coyle. Angie Mack, the victim assistance coordinator, may be contacted at 866-435-4397 or 712-279-5610. She is not employed by the diocese and helps both victims who are minors and those who are adults and were victimized in their childhood by a member of the clergy.