You are here: Home / News / Scholten says King ’10 miles down the road’ from mainstream on immigration 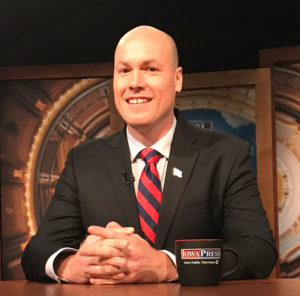 J.D. Scholten, the Democrat challenging Republican Congressman Steve King, says the end of “straight ticket” voting in Iowa may give his own campaign a boost this year.

“If you look at the 2016 election numbers, four percent of all the people who voted in my district, they undervoted in this race. They voted for president. They voted down ballot,” Scholten said. “…To me, that is a Republican who said: ‘I can no longer consciously vote for Steve King.'”

Those 2016 voters Scholten is talking about were picking and choosing among the candidates rather than checking the box to vote for all the Republicans on the ballot. Now that such “straight ticket” voting for all the candidates of one party is no longer an option in Iowa, Scholten says he expects more GOP voters to skip voting for King this year.

“With straight ticket off, they’re going to have to see his name and make that decision,” Scholten says, “and I see that getting into a lot of people’s heads.”

There are 70,000 more active Republican voters than Democrats in the fourth district. King has easily won the district in the eight previous elections, but Scholten suggests King’s hard-line stance on immigration is wearing thin in the area.

“When it comes to immigration and a lot of things there’s Democrats and there’s Republicans and 10 miles down the road there’s Steve King,” Scholten says, “and especially when it comes to immigration because we have the pork plant we have in Sioux City that’s been open for about a year and the pork plant that’s going to open up in Eagle Grove and both of them have talked about the need for an immigrant workforce.”

Scholten says small business owners all across the political spectrum tell him they need workers.

“Last harvest, I was down in Greene County and they needed for the harvest, their grain elevator needed 39 workers and they didn’t get one American citizen to apply for that.”

“Being the second-most agriculture producing district in American and having a congressman who doesn’t understand the needs of his own district because right now the VISA programs match, for agriculture, the coasts. They don’t match the year-round workers we need in our district,” and so he’s advocated — he, as in Steve King — has abdicated his own leadership for his own personal agenda on this.”

The process of becoming a naturalized system must be improved as well, Scholten says. Scholten made his comments this morning during taping of Iowa Public Television’s “Iowa Press” program that airs tonight at 7:30.