You are here: Home / Sports / Butler added to watch list 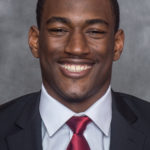 Select voters of the award, given annually to the nation’s best receiver regardless of position, will trim down the list to 10 semifinalists on Nov. 12.

The Baltimore, Maryland native leads the nation in yards per reception at 24.0.

His big-play ability has been on full display this season, recording nine of ISU’s 11 longest plays with eight receptions of 40 yards or longer.

Butler, who leads the team in receptions (33), receiving yards (791) and TD catches (8), has recorded four 100-yard receiving games on the year, including three-straight. He ranks 10th nationally in receiving yards per game at 98.9.