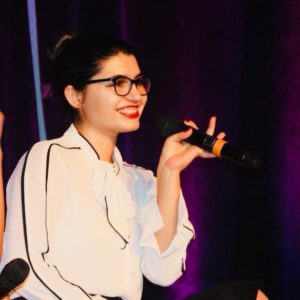 An Iowa native is being named one of CNN’s Top Ten Heroes for 2018 for her work running a non-profit group that eliminates food waste while feeding the hungry.

Maria Rose Belding of Pella is a senior at American University, studying public health. The 22-year-old is also co-founder and executive director of MEANS, which stands for Matching Excess And Need for Stability.

Belding says, “We built a website that makes it easy and free for grocery stores or restaurants or other folks who make food for a living to tell us, ‘Hey, I’ve got extra food,’ and we’re able to put them in touch with soup kitchens and homeless shelters and other folks feeding the hungry — all for free.”

After just three years, the database is now being used in 49 states and has moved more than two-million pounds of food.

Each of the ten CNN Heroes gets $10,000 and a vote is underway now at CNNHeroes.com to name one standout hero who will get another $100,000. Belding says her winnings are all going to MEANS, which she and a friend first conceptualized as teens while working in her church’s pantry in Pella.

The news release from CNN says all of the heroes “have dedicated their lives to changing the world,” which Belding says is humbling.

“It’s a very generous way to describe what we do. It’s wonderful and I appreciate it from them,” Belding says. “I simply see our work as, we had an idea that could help a lot of people, we happened to have the tools and the resources and the knowledge to pull it off. We didn’t have any excuse not to.”

CNN called Belding to tell her she’d made the Top Ten Heroes list at 10 o’clock one recent night. She said she was a “human stress ball” as she was studying for an organic chemistry exam and let out a scream upon getting the news.

While the award and the $10,000 is a huge boost for the organization, she say the real bonus is the exposure across the country.

“Every time we get a national media piece, we have all of these folks who run food pantries who hear about us for the first time and sign on, so we always see a huge increase in the number of partners we have,” Belding says. “And we start seeing more food move, because we also get all of these food retailers who had never heard of us or what we do who then start using us because they saw us on something like CNN.”

Supporters can vote daily at CNNHeroes.com by logging in via email or Facebook. Viewers can vote up to 10 times a day, per method, every day through December 4th.

Anderson Cooper and Kelly Ripa will host “CNN Heroes: An All-Star Tribute” on December 9th to announce the final winner.