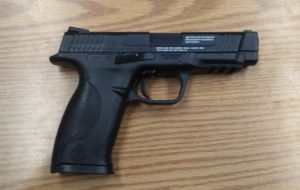 The Sioux City Council has passed the first reading of an ordinance that would make it a misdemeanor to carry a BB gun in public.

The council voted 5-0 Monday on the proposal to bar people from carrying “toy” firearms, such as pellet guns, which police say are becoming increasingly difficult to distinguish from actual guns. Sioux City Police Sergeant Scott Hatting told council members BB guns have evolved well beyond the toy rifles of days gone by.

“They have evolved into what appears to be a real gun, right down to the markings, the color, the weight, and the projectiles,” he says. “I mean, these are traveling at speeds comparable to a 9mm. The BB’s a lot smaller, but it causes a lot of damage.”

Hatting says Sioux City Police have had several encounters with individuals carrying the replica weapons and are faced with the question of whether to use deadly force.

“We are finding a lot of people carrying these…using them for intimidation, assaults,” Hatting says. “We’ve had countless robberies with BB guns.”

If the ordinance goes into effect, Hatting says officers will not be looking to cite someone taking target practice in their yard. Instead, the focus will be on people carrying the guns in public.

“There is absolutely no reason why you need to have this type of weapon on your person, in public,” Hatting says, “unless you’re looking to do something criminal.”

Hatting has a personal reason for proposing the ordinance. Three years ago he encountered a 17-year-old carrying a BB pistol that looked like a real handgun.

“When I approached him, he kind of laughed, turned away and went for the gun and he didn’t get how quickly this could have gone bad,” Hatting says. “I literally had to pull him outside and talk to him about it and I said: ‘Do you realize that if you had pulled that out of your pants, you could have easily have been killed right there?’ Absolutely the last thing any police officer wants to be involved in is a shooting, definitely doesn’t want to be in a shooting over a BB gun.”

Hatting says thousands of people in the area also have conceal carry permits and it could be tragic if someone armed with a BB gun unknowingly confronted someone legally carrying a concealed real gun. The city council in Sioux City will hold a public hearing on the proposed ordinance and must vote in favor of it two more times before it would go into effect.