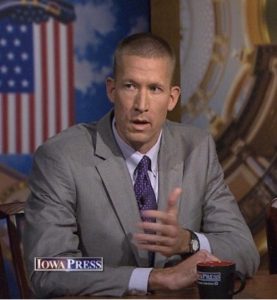 “This is one of the more interesting set of results on Election Night in recent memory,” Larimer says. “You have a lot going on here.”

Republican Governor Kim Reynolds will stay in office. Republicans retained firm control of a majority of seats in the Iowa legislature. Democrats, meanwhile, flipped two U.S. House seats in Iowa that had been held by Republicans and came within a couple of points of knocking off long-time Republican Congressman Steve King.

“During the voting process, there were Iowans who were splitting their ticket,” Larimer says. “They were going through and making a deliberate choice to vote for a Republican in one race and a Democrat for another, and so that’s going to take some time for political scientists to understand exactly what was going on and exactly what the motivations were for Iowa voters.”

Tens of thousands of Iowans split their tickets, voting for the Democrat in the federal race in their area, then switching over to vote for Republican Governor Kim Reynolds. Reynolds beat Fred Hubbell, the Democratic Party’s nominee for governor, by about 40,000 votes. If you add all the votes in Iowa’s four congressional races together for a statewide tally, the Democratic candidates in the four districts got about 50,000 more votes than the Republican candidates.