You are here: Home / News / Flakes may fly soon, Iowans need to get prepared for winter weather 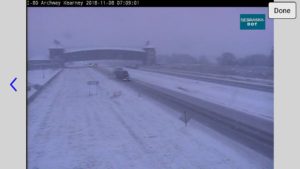 This is the scene on Interstate 80 in Kearney, Nebraska, this morning — and it’s headed our way! (Nebraska DOT photo)

As two wintery storm fronts are headed for Iowa today  and tomorrow that may drop a few inches of snow, it’s coincidental today is also Winter Weather Awareness Day.

Meteorologist Chad Hahn, at the National Weather Service office in Johnston, says one goal of the day is to get Iowans cogitating about what it’ll be like when the next big snowstorm hits.

“We know it’s going to, it’s not a matter of if, it’s a matter of when,” Hahn says. “The more you can think about it ahead of time and have a plan to prepare, the better off you’re going to be to make the right decision for you and your family.”

Education is one of the keys. Hahn says Iowans need to know the difference between a watch and a warning, especially when severe winter weather is in the picture.

“It might be two days out we may issue a watch. That doesn’t mean we think it’s going to happen but the possibility is there,” Hahn says. “It’s to heighten the awareness of the event that we’re expecting. As the confidence increases, we will upgrade our products to a warning.”

The winter season ahead has the potential to be less frigid than last winter.

Hahn says, “That’s based on an El Nino that’s developing across the tropical Pacific through the winter months and that tends to bring warmer-than-normal conditions across much of the country, including the Iowa area.”

Get an updated forecast and learn more about Winter Weather Awareness Day here.