You are here: Home / News / Reynolds reflects on what’s ahead in first full term as governor 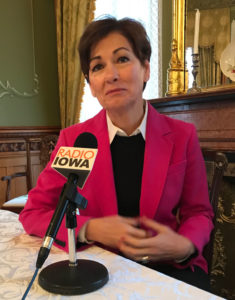 Governor Kim Reynolds this morning said she has just started thinking about personnel changes in state government and the policy agenda she’ll ask her fellow Republican lawmakers to pass in 2019.

“We’re starting to do all of that right now,” Reynolds said. “I didn’t want to get ahead of myself. We had to win an election first, so that was my priority.”

Reynolds became governor in May of 2017 to fill out the remainder of Terry Branstad’s term — the first woman to be chief executive of Iowa government. This week, she became the first woman ever elected governor of Iowa and Reynolds said shattering that glass ceiling gives girls in Iowa a new perspective.

“Sometimes you have to see it to believe you can do it and, from that perspective, I’m excited about that,” Reynolds said.

It was a “bittersweet” election night, Reynolds said, as voters retired two Republican congressmen who’ve been serving in Washington since 2015, while retaining Republican control in the state capitol.

“(Voters) continued to give us the majority in the House, the Senate and the governor’s office,” Reynolds said. “…They do believe that the state is headed in the right direction and they didn’t want to stop and reverse course.”

As she said in her Election Night victory speech, Reynolds indicated she hopes to meet with Fred Hubbell, her Democratic challenger. The discussion is likely to center on privatized Medicaid. Hubbell often highlighted complaints from both patients and those who provide care to the 680,000 low-income, elderly and disabled Iowans in the Medicaid system.

“I’m proud of the changes that we’ve made. We’re far from done. We have to continue to watch this. It’s new. We have to see if the changes are getting the results that I’m looking for,” Reynolds said, “but maybe there’s something I’ve missed, so I would be interested in hearing from him and hearing what he heard on the trail and how we could maybe resolve some of those differences.”

Reynolds said she’s working with her budget director to evaluate the state’s finances, aiming to carve out a reduction in the state’s corporate income tax rate — perhaps eliminating some income tax CREDITS in the process. As for staff changes, when Reynolds took over as governor last year she inherited the roster of state government administrators appointed by Terry Branstad.

“Branstad was the governor and I got to weigh in on some of that, but he made the final decisions and so I want to look at putting my team together and so I’m excited about that,” Reynolds said. “…People that have served eight years in an administration oftentimes they’re ready to do something else, too, so it’s necessarily me, but we’ll have people that will be ready to do something else as well.”

Reynolds made her comments during an interview this morning with Radio Iowa.