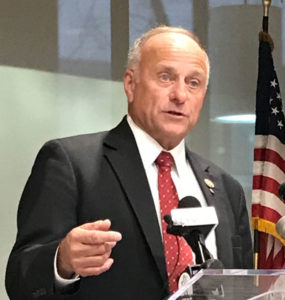 Republican Congressman Steve King says he’s ready to mount a vigorous defense of the president in the U.S. House Judiciary Committee next year.

King predicts “a good number” of Democrats will try to impeach the president once Democrats take the majority in the House in January.

“I sit on the House Judiciary Committee, you know, up on the top bench. I will be third in seniority, I believe, so if they try to bring impeachment of President Trump through the Judiciary Committee, I’ll be sitting there doing battle with all of the vigor that I can to defend this president and help him be as effective as he can be,” King says. “I dread that. I don’t look forward to that, but it must be done.”

Once he returns to Washington, King also plans to confront Ohio Congressman Steve Stivers, the head of the National Republican Congressional Committee. On October 30th, Stivers took to Twitter to say the country “must stand up against white supremacy and hate” and Stivers “strongly” condemned King.

“When he criticized me, that lended validity to the charges made by all the Democrats…and I believe Steve Stivers was worth to my opponent at least $1.5 million for what he said and so there will be a reckoning for that kind of behavior and I would say of Steve Stivers, he has no path to leadership for the rest of his political life, but that’s not enough,” King says. “He and I haven’t had a conversation yet, but you can just about imagine how that’s going to go.”

King won his eight previous races for congress by an average margin of 23 percent. His victory margin in 2018 was about two percent.

“I feel like Kirk Ferentz when the Hawkeyes beat Michigan State in a triple overtime,” King says. “I talked to him after the game and he said: ‘We cut that one a little close.'”

J.D. Scholten is the Democrat who came within 10,500 votes of defeating King in  district that has a 70,000 Republican voter registration edge. King has accused his critics of trying to “Kavanaugh-ize” him in the closing weeks of the election.

“The people over here knew better, on balance,” King says. “It peeled some off. It may have peeled off 15-18 percent, but in the end I’d stopped into 382 towns. Our staff has been there every year, in each town, and I got to all 39 counties at a minimum every year and that’s what sustained the victory here.”

Scholten has not ruled out another run against King in 2020. Long-time Iowa Congressman Berkley Bedell and Senator Tom Harkin — who was first elected to the House — were both elected in their second try for a House seat.