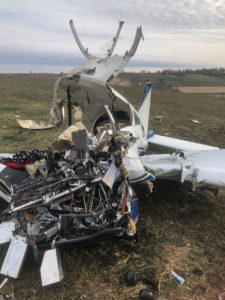 Four people died in this plane crash near Guthrie Center.

Guthrie County authorities say the pilot of a small-plane that crashed in a cow pasture Friday evening suffered a heart attack.

The victims have been identified as 49-year-old Edward Anderson, 36-year-old Patrick Kellen, and 15-year-old Samantha Clark – all of Le Mars – and 28-year-old Tyler Douvia of Merrill. Anderson was the pilot.

Officials at the Guthrie Center Airport were told Anderson had a heart attack and a student pilot would be attempting an emergency landing. The plane never arrived at the airport and dropped off radar. An extensive search for the plane ended around 6:30 Saturday morning when a Guthrie County resident discovered the wreckage in a pasture in rural Guthrie Center.

(This story was updated at 12:30 to correct identity of pilot)