You are here: Home / News / About seven percent of Iowans are military veterans 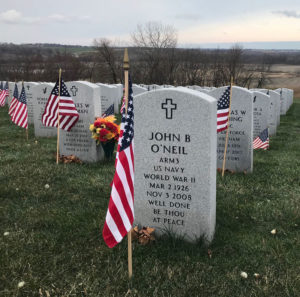 Gravestones at the Iowa Veterans Cemetery.

Gatherings are being held throughout Iowa on this chilly Monday to honor America’s military veterans.

November 11th is the day designated as Veterans Day, to commemorate the end of World War I, but today is the officially recognized Veterans Day holiday.

Governor Kim Reynolds spoke early this morning at a Veterans Day ceremony. “Veterans Day is a time for us to pause and collectively demonstrate our commitment and our gratitude to those who have worn the uniform,” Reynolds said.

About seven percent of Iowans have served in a branch of armed forces. 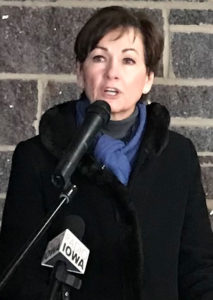 “The Declaration of Independence and the Constitution would be just words on a paper were it not for the courage and the valor of our men and women in the military, willing to defend the bold principles those documents embody,” Reynolds said. “It’s because of them that we are able to assemble here today and blessed with the freedoms that we share.”

More than 114,000 Iowans served during World War I, which was sometimes called The Great War or the War to End All Wars.